Freshwater aquariums are used for rearing freshwater aquatic organisms. If you keep freshwater fish either as a hobby or for commercial purposes, then you would need to know the exact way to care for them so that they do not die off. One of the ways of making sure that your fish thrives in its tank is to add some substrate to the tank. Although it is not compulsory to add a substrate to your aquarium, it is highly recommended that you use one.

The most common substrates that are used in aquariums are gravel and sand. The question that arises, however, is “is sand or gravel better for freshwater aquarium? Choosing the best substrate, that is, the material that lies at the bottom of the aquarium is essential and not only for its aesthetic values but also because it has a significant impact on the wellbeing of your fish and plants. Although they are somewhat similar, they each have their benefits and deficiencies.

With that said, different types of aquariums require different substrates. Before choosing a substrate for your freshwater aquarium, you have to consider some properties of the substrate, which would determine whether it is right for your aquarium or not. Such properties include:

1. Size Of The Particle: The particle of different substrates differs in size. Sand has a tiny particle size, while gravel has a larger particle size. Sand is compact and does not allow water to pass through it as freely as gravel does. Also, its tendency to compact can lead to areas lacking in oxygen. Because of this lack of oxygen, a substance known as hydrogen sulfide, which is toxic to fish, can form in the aquarium.

Gravel, on the other hand, permits the penetration of wastes and leftover food and can lead to a buildup of substances that are dangerous to the fish if not properly cleaned. Also, some species of fish tend to pick up substrates in their mouth and move it around. The substrate they can do this with is sand, and it can cause irritation to the fish, large-sized particles are more beneficial to use as substrates because the fish would be unable to scoop it in their mouth.

2. The Ease With Which You Can Clean The Substrate: Cleaning the substrate in your fish tank frequently is vital to the wellbeing of your fish. This is because cleaning it often helps to prevent the buildup of dangerous microorganisms and algae in your tank. If you are spending a lot of time and effort cleaning your fish tank every time, you are going to get tired pretty fast. Therefore, it is best that whatever substrate you are choosing for your fish tank is easily cleaned.

So Is Sand Or Gravel Better For Freshwater Aquarium?

Benefits of using gravel as a substrate for freshwater aquarium.

Disadvantages of using gravel as a substrate.

Benefits of sand as a substrate

Disadvantages of using sand as a substrate for fish.

For freshwater aquariums, the best substrate to use is gravel. This is because gravel allows water to flow through it, resulting in the effective prohibition of the buildup of microorganisms like some harmful bacteria and amoeba in your aquarium. It is essential to prevent this buildup because it can lead to an accumulation of aquarium mould which can make your fish sick.

Another important reason why you should use gravel as a substrate is that it is big enough not to pass through the filter of your aquarium and clog it. When purchasing the gravel to use for your freshwater aquarium, it would be better if you chose smaller sized gravel. Pea-sized gravels are the perfect choice as the spaces between them are small enough to prevent food particles from falling in between them. This helps to keep your aquarium neat and tidy. 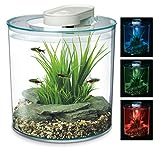